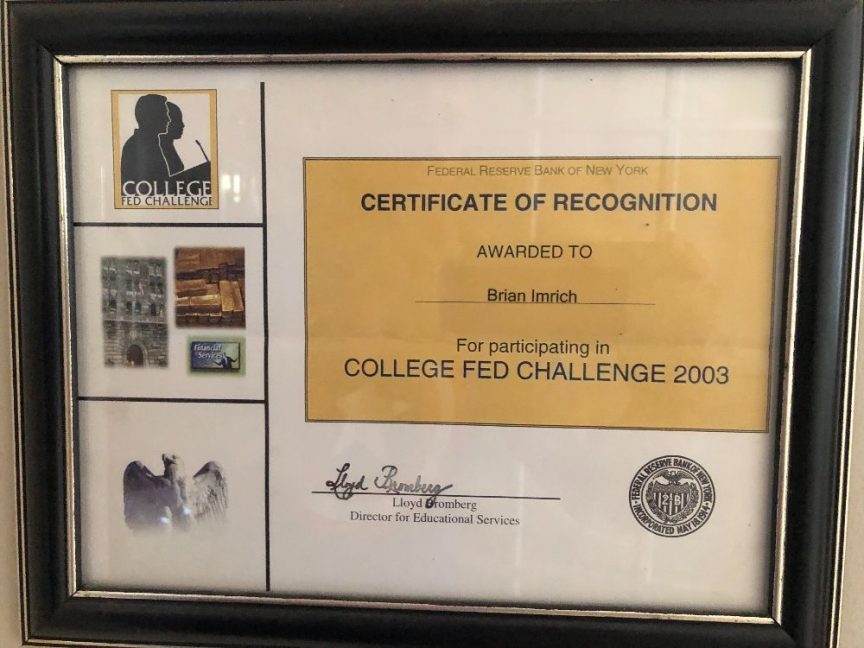 My major in college was economics.   There were a number of reasons I found economics interesting, but it also didn’t hurt that it required FAR less credits to graduate than say a Business Administration degree. It also didn’t hurt that it was the first class I got an A in or that there were only really two economics professors so you got to know them really well.  In the beginning of my senior year, when one of my now long familiar professors approached me about joining this “Fed Challenge” team, it surely didn’t strike me as the best way to kick off my last year. See, every year the Federal Reserve held a competition in New York City for participating colleges to compete in.  In essence, a team of 5 players would come up with and present their thoughts on the current state of the economy and then do a question and answer session with the judges.  After a while she wore me down, and so off I went down this rabbit hole of preparation and studying with four of my fellow econ classmates.  Geneseo had never participated in the challenge before and so as much as we wanted to do well, the pressure was also pretty low being our first time at the rodeo.  When we got to NY, we were super impressed with the pedigree of schools we were up against.  We did our best, and as the day went on, we were feeling pretty good with our overall performance. The event, with clips and pictures of us, was even featured on CNBC, which didn’t lead to as many autograph requests as I had expected, but still pretty cool. Back in 2003, the United States was still struggling from a recent recession, the stock market had finally stopped falling from the implosion of the “dot com” era bubble, the US was invading Iraq, AND we were battling China over alleged currency manipulation.  So yeah, kind of felt like there was a lot going on. During the Q & A session, in one of my answers I said something along the lines of “these are unprecedented times” in an effort to support our stance that the Federal Reserve was better suited doing nothing right then and instead, should wait to change interest rates.  Well, we came in third.  First place got $10,000, second place $5,000 and 3rd place, this sweet certificate you see above.  We probably should have been prouder, but in the moment, we were disappointed and so we did what many seniors  in college would do….we went to the swanky reception after the event and chugged red wine.  Towards the end of the event, one of the judges came up to me.  He had this low voice and spoke with what seemed like the wisdom of the ages.  He said to me, “You and your team did a very good job.  One thing, for you to know… it’s always unprecedented.  It’s always unprecedented.” He went on to share some other thoughts and explained how you need to sift through all the information in order to be acutely aware of what information is worth listening to, in that moment.  That interaction has stuck with me ever since, and I have been reflecting on it even more frequently these past couple of months.  Currently, we have an ongoing, albeit much subsided, global pandemic, rocket paced price inflation, a negative and stagnant stock market, WAY too many job openings and a vicious war still dragging on in the Ukraine. So yeah, kind of feels like there is a lot going on and since I’ve never done it before, and this post is already plenty long, today is our first ever cliff hanger!  If you want to know what piece of information I am acutely aware of and is worth listening to at this moment, tune in next week for part II.  Happy Friday!