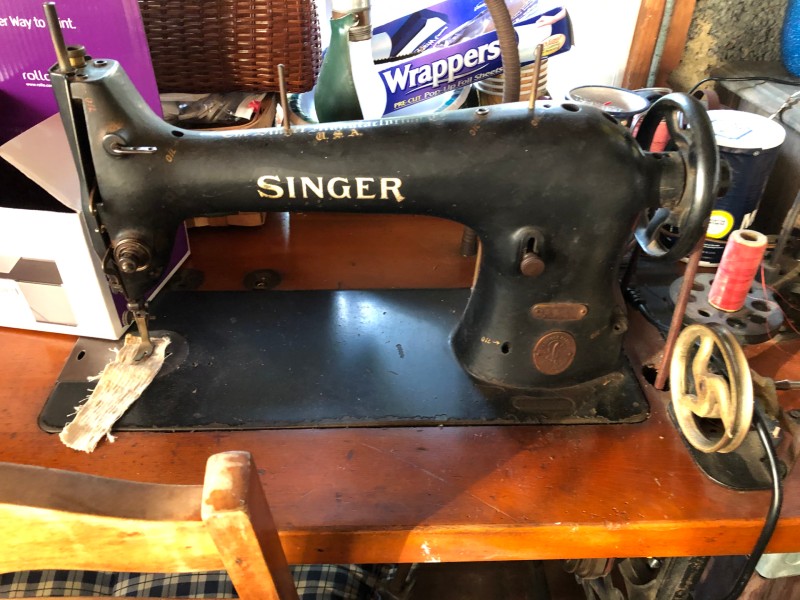 Back in the 1940’s my great grandparents had a small upholstery business in New York City and eventually they decided to build a “country home” that they planned to retire to.  Although only 30 minutes from where I grew up and 1 hour from New York City, in those days, with the speed of transportation, it truly was the country.  From the way my mother describes it, it was a rather small hunting camp that my great grandfather expanded, dug out the basement himself, and built a large room above the single car garage that was built into the hill.  When I was young, we spent most summer weekends there, and we constantly butchered all rules of the English language in saying we were going “up the country.”  A couple years ago, my Mom asked that my brother and I carry a sewing machine from inside the house, to the room built above the garage.  I’ll never forget how incredibly heavy that Singer Sewing Machine and table were. I intentionally chose what I thought to be the heavier side, to stick it to my brother, and I never let him know I regretted that decision immediately.

The Singer Manufacturing Company, as it was renamed in 1865, originated in 1850 when Isaac Merritt Singer invented the world’s first “practical sewing machine.”  By 1890, it had captured 90% of the global market share.  The company’s longevity and history are incredible, including stopping production for six years from 1939 – 1945 to focus production on war time goods.  I could go on and on about the 169 years of history, or talk more about me outlifting my brother, but there are two parts that I find very interesting at this moment in time.

The first, is that according to the company, most of the machines made today are manufactured in Brazil, China, Taiwan and Vietnam.  For the first time in a long time, I see the vulnerability of outsourcing and “offshoring” so much of our manufacturing potential.  In a time of need, our ability to pivot from sewing machine to military equipment, or masks for that matter, is severely inadequate.  Is profit maximization, at all costs, the most important metric in weighing the success of a business?

The second, and on a much more positive note is that at home today, probably a little bored, the next Isaac Singer is 5, 6 or 15 years old.  Their normal routine is upside down and out of necessity, they are getting the opportunity to think, to create and to imagine in ways they haven’t had the chance to before.  In ten years time, this creativity spins itself into their invention of the first ever…The company thrives and grows on a platform of balance and a level of thinking that shows compassion to the community and country with which it started.

I look forward to ten years from now. 🙂