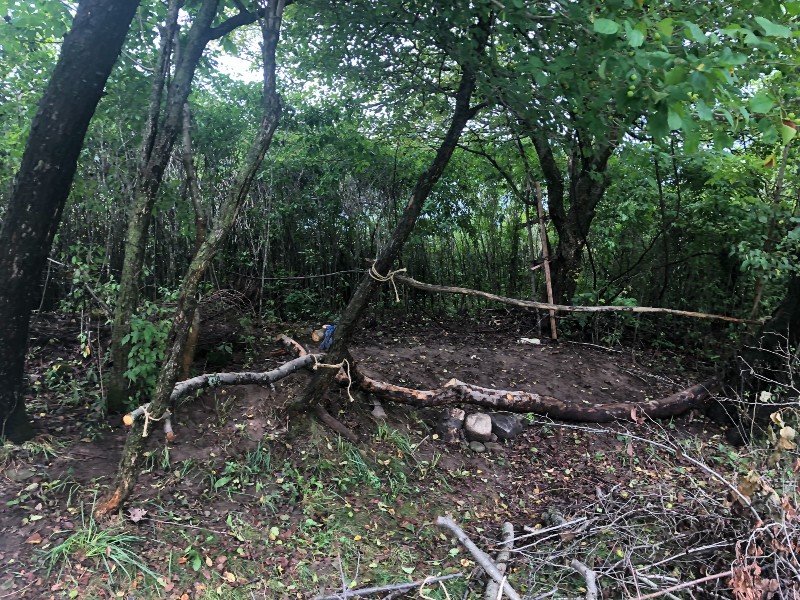 Just this week I finished a very interesting book titled “Strong Towns” by Charles Marohn, Jr. and I loved it. It  was recommended to me by my brother-in-law, and the main theme of the book is centered around what it takes to create and sustain a productive and healthy city/town.  One of the discussion points that really hit home for me was this idea of “building to completion.”  Instead of building something that has room to expand, room to grow and the potential to incrementally change over time, we more often see buildings, roads, homes built to this grand, final stage of completion.  The book talks about the fragility created in taking this approach.  There can be an overconfidence that allows us to construct these final products without giving credence to the fact that we do not know what the world may require in 10, 15 or 20 years.  Even more importantly, it doesn’t leave much room for the imagination or what we as individuals may want to change over time.

In the back of our yard (far from where my intended basketball hoop will go 🙂 the kids and I started to clear out brush and weeds around these trees so we could fashion some kind of fort.  When a large branch fell earlier in the summer, we had all the sticks, logs, branches we needed to get to work.  We cut a couple of thick grape vines that were hanging down and those immediately turned into swinging vines just strong enough to get the kids off the ground a bit.   Next, I tied one long branch between two trees and laid the largest branch down on the ground to build some kind of foundation.  Both of these quickly became balance beams.  Before I could do any more, my son found a couple long smooth sticks and quickly started fencing everyone.  The top of the fort became the fencing club and in no time the neighbor was over, and the kids spent an hour fencing each other and making up club rules.  Never in my wildest dreams did I think our barely constructed hideout would morph into a fencing gym and occupy the kids for so long. Eventually, like all things, they will tire of the fort, whatever form it gets to, and we can take it down and junk the sticks or cut them up for firewood. This is the beauty and simplicity of not building to completion.

When building a financial plan there are many examples of attempting to build to completion.  This goes in both the design of the plan and how you choose to implement that plan.  For example, the plan says that in order to retire at age 60 you need to save $10,000 a year towards retirement.  So you contribute to your company sponsored 401k plan because that is the prudent and textbook way to go about putting the plan into action.  Let’s reframe the approach though and think about how saving pre-tax money into your 401k plan when you are in your 20s and 30s is essentially the same as “building to completion.”  This money, however tax efficient it can grow, is now locked up for the next 20-30 years.  There is no easy way to change course or back those dollars out. The same case can be made for using a 529 college savings plan to fund your children’s education while they are still in diapers.  For some clients, that concrete approach and plan is reassuring and helps build confidence in the future.  For others, that lack of flexibility may be inappropriate or even create undue stress.

Without a crystal ball, there is no absolute correct answer, but somewhere between a two-story custom made fort and a two-logged fencing club lies an in between that could be the most practical approach.  As you look around and in your life, are there things that you are building/doing to completion that could use less structure and in doing so open up the opportunity for growth or imagination?